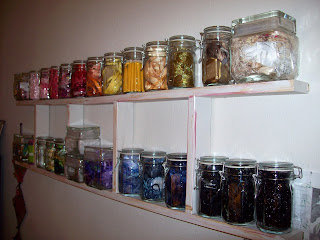 I have been wanting to do something new with my fibers and ribbons in an attempt to use them more often. I so have some spools of ribbons on a holder on my craft desk but the rest were in 4 baskets on a shelf. Let's just say the ribbons were in the baskets but needed a lot of help to really be organized. I had them roughly organized into reds, neutrals, greens and blues but as you can see they were over flowing and in need of help. 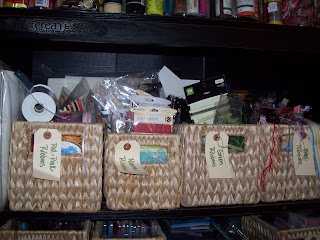 I had a ladder type shelf that I decided to use to display the ribbons. Here is what I had on the shelf before. It needed an update as I'm tired of the games and more child inspired decorations. 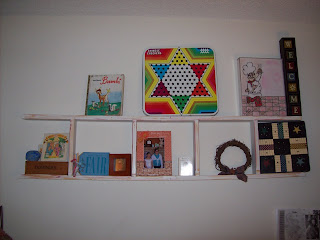 I decided the shelf was just wide enough for some jars that I have had for a year or more just waiting for inspiration. I started out with 24 of the hex jars but due to an unfortunate incident I'm now down to 21. Let's just say if anyone has a sure proof way to get glass out of carpet to let me know! 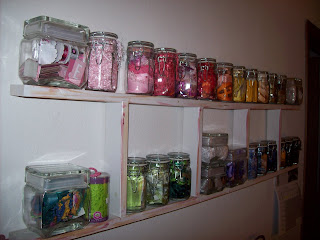 I arranged by colors and included some non-fibers on the wall as well to give the colores a bit more balance. 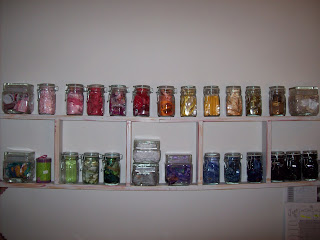 I'm hoping seeing the jars will inspire me to use them a bit more often, as you can see I have quite a collections of fiber and ribbon. I did still have one basket of ribbons not on the wall, it was mainly miscellaneous colors that I would not have been able to fill up a jar with. That is if I would not have broken a few jars in the process.

I do still have spools of ribbon on a holder on my craft desk. Next I'll have to tackle getting my desk a bit more organized so I can take a picture of the holder on my desk. It was custom made for me by one of my brother-in-laws and I love it. I am able to store spools of ribbon, plastic containers filled with eyelets and brads and pretty much all of my smaller embellishments.

Posted by ArtfullyJune at 4:10 PM