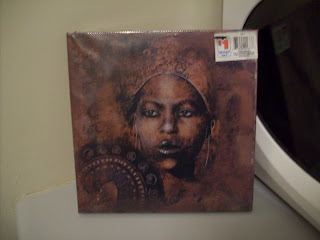 I picked up two of these frames at a local discount store for 69 cents each. They had the tag from a dollar store. Originally $1, but well worth that for the frame alone.

The frames are just under 8" square so I knew I had lots of choices in scrapbooking paper that would work to recover it. The original artwork seemed to be a light weight glossy paper on top of a fabric backing. At first I thought I would be able to pull off the paper so recovering it would be easier. Well, the paper didn't come off too well so I quickly gave that up and sanded it a bit to rough up the surface so the Mod Podge would have something to stick to.

A thick layer of Mod Podge and an 8" piece of scrapbook paper give me a good base to work with. After painting the sides of the frame I added some paint over the paper as well, then topped it off with some silver ink as well. 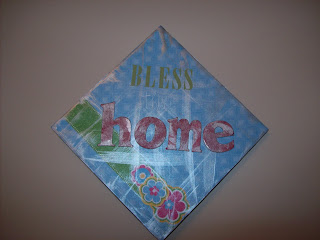 A few rub on letters and some chipboard letters that I inked up and I have a new sign for my apartment door. The chipboard letters were originally a royal blue and silver color. I loved the size when I saw them so I had to get them. I was able to pull off the blue and silver portion and was left with raw chipboard just waiting to be inked. I bit of ink and I have letters to match my project. The best part of this project is that I have another frame left to make over. 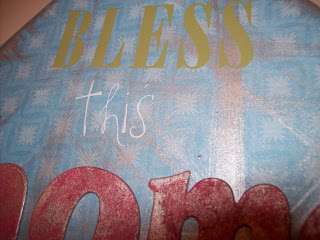 Posted by ArtfullyJune at 9:33 PM