I decided that I needed to take down my Halloween decorations and make my home more fall and less Halloweenish. Yep, Halloweenish is a word, at least to me it is.
I cleaned up the patio a bit.  Never mind that a few minutes later there seemed to be just about as many leaves on the patio as there was before I cleaned it.
The left corner of the patio. 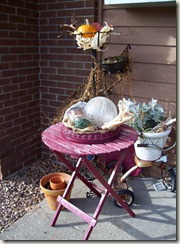 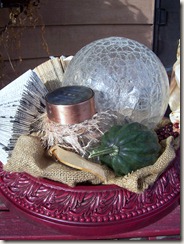 I’ll have to wait until later tonight to see if it works of if I should try something different. 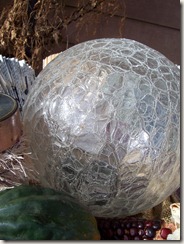 I pulled out the dead plants from my hanging basket and added a few gourds, a squash a leaf garland and some Indian corn. 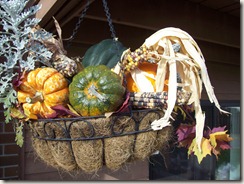 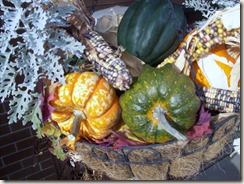 I put a pumpkin in the top of the plant stand with a cement leaf and a few pieces of Indian corn.   I’ve had the corn for a few years and decided it was time to put it outside so I don’t have to store it for another year. 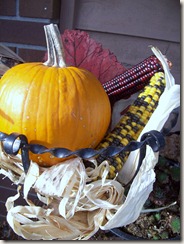 I was going to bring this pot inside and re-pot my spiral rush plant in it but since there was still some live plants in there I decided to add a squash and some Indian corn and keep it outside. 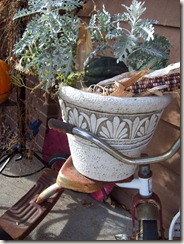 Not a lot of color for now but I think I’ll keep it. 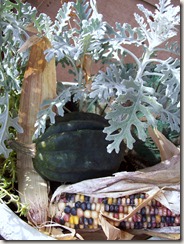 I added a touch of paint to the largest cement leaf I had.   I think it brings a nice touch of color. 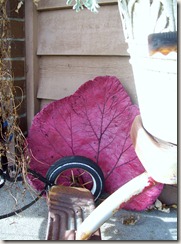 I replaced the black skeleton wreath with the white one again.   I added an autumn welcome sign to complete the fall look. 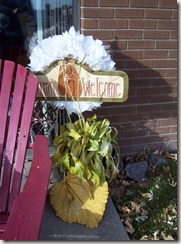 Notice the hosta blooms?  Well, I didn’t think I would get blooms from a potted hosta but it shot three stalks.  One I fried, one I broke off and the other one froze off.  No hosta was meant to bloom in MN in October/November anyway, right? 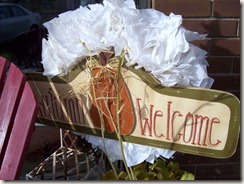 I’m hoping my fall display will remain snow free for a while although I know it probably can’t expect it to last too long here in Minnesota.

What have you done to decorate after Halloween?

June
Posted by ArtfullyJune at 5:35 PM