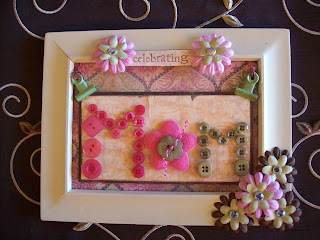 Well I made over the 30 cent frame I bought yesterday. I decided to make a Mom frame so I could submit it for a TAC contest about Mom. I decided that since I have more crafting time now that I should try to submit items for contests so I can potentially win some free product. I know it is probably a long shot but worth the try.

The frame didn't take too long, I used the same glossy navajo white paint I used on the butterfly frames. I think I should go get another can as I will probably be using it on everything pretty soon!

This one I put light coat of a shimmery gold paint as well. I couldn't get it to show in any pictures. It gives the frame an almost iridescent sheen. The shimmery gold paint was on clearance at Michael's. I might have to see if there is still some there and pick up another can. I think it was $1.50 a can. It is a smaller can but well worth that price. I even used some of it on some of the paper I used.

I used patterned papers from TAC's More Mimi collection and an light cardstock that I ran a brown inkpad over to get the color I wanted. The brown's I had were not quite dark enought. I have not used buttons much lately - I guess I got all my buttons on this one project. I used most of the matching buttons in dark pink and green that I could find in the MM Lemonade Buttons and Blossoms set. Good to finally use them. I might just have to keep using buttons, maybe a whole frame filled with buttons?? I better get thrifting.....

Well the frame was the only creative project I completed today, well so far today. This week I have been most creative late at night. I need to put away the remenants of supplies I used on the frame and that will probably lead to some more late night crafting today.